Your own world of Vitamins, nutrition and healthy living blog

Imagine if every one of the 60 million men, women, and children living in the western United States suited up each morning for 20 to 40 minutes of low-impact, no-sweat exercise. That’s what happens in China, where an estimated 60 million people-particularly the elderly-start their days with routines that look just as elegant and graceful as ballet.

And while both have existed for thousands of years, they’re relative newcomers to the United States. Tai chi chuan (also known as tai chi) has gradually gained popularity over the past 25 years as a gentle, relaxing form of physical activity and as a way to cope with a variety of ill­nesses. Qigong (sometimes spelled “chi gong” or “chi kung”) has taken root in this country more recently, although for similar reasons. 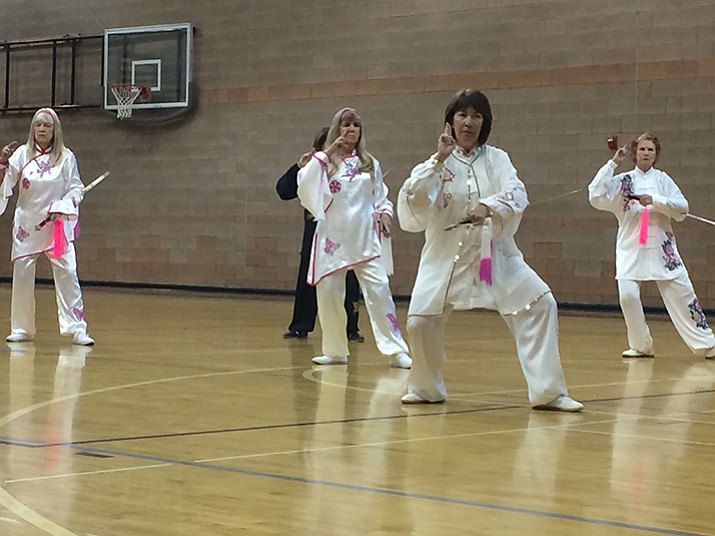 Qi: The Key to Healing.

In Chinese medicine, chi or qi is life energy, a vital force not formally recognized by mainstream M.D.’s. Qigong-the word means “cultivation of qi”-originated about 3,500 years ago, as Chinese physicians realized that a combination of low-impact movements and meditative focus could move qi around inside the body. Qigong exercises inspired all of the martial arts, including tai chi.

Tai chi was developed by Chang San­Feng, a semi-mythical Taoist monk and qigong practitioner who is said to have lived around A.D. 1400. One night, the story goes, he dreamed of a snake and a crane fighting. He was so fascinated by the animals’ movements that he decided to combine them-as well as the combative movements of deer, tigers, bears, and monkeys-with qigong. This modified version of qigong became known as tai chi.

The phrase tai chi chuan is variously translated as “supreme boxing” or “optimal fist fighting.” It is considered a martial art­but unlike karate and kung fu, with their hard punches and kicks, tai chi emphasizes fluidity of movement. According to tai chi masters, this gentle dance fosters the flexibility of a child, the strength of a lumber­jack, and eventually the wisdom of a sage.

Tai Chi:Talking the “work” Out of Workout

Because tai chi is more popular than qigong in the West, it has been subjected to more extensive research in the United States and Europe. The majority of studies have found that tai chi offers significant and surprising health benefits.

One reason it’s so therapeutic is that it provides a deceptively intense workout. Canadian researchers reached this conclusion after monitoring a small group of men who had been taught a 20-minute tai chi routine. The men’s heart rates rose to about 50 percent of their age-specific maximums-not high enough to qualify as a strenuous aerobic workout, but sufficient to reduce the men’s risk of heart disease, high blood pressure, diabetes, arthritis, osteoporosis, and obesity.

This is the sort of exercise that physicians typically recommend for people over age 55. No wonder other researchers have since endorsed tai chi as a good all-around activity for seniors as well as for those with chronic medical conditions.

Tai chi also appears to have a positive effect on a variety of specific health problems and concerns. Studies show that it can help people who have high blood pressure,
rheumatoid arthritis, and multiple sclerosis.

Research has shown that tai chi can also help improve balance and prevent falls. At Emory University in Atlanta, researcher Steven 1. Wolf, M.D., divided 200 people (average age 76) into three groups. One group received tai chi instruction for 15 weeks, another received biofeedback balance training for 15 weeks, and the third attended seminars about fall prevention but received no physical training. All of the participants reported their falls over a 4-month period. Those who practiced tai chi went an average of 48 percent longer without a fall than those in the other two groups.

Qigong: Proving Its Worth

Qigong has never been as popular outside China as the many martial arts it inspired. But that’s slowly changing as research-most of it from Asia -confirms the profound health benefits of qigong’s subtle, meditative movements. So far, studies indicate that qigong can help people who suffer from heart disease, stroke, or respiratory problems.

It may also help with chronic pain and stress. In fact, people who practice qigong generally agree that the exercises enhance their ability to manage stress. When researchers at the Chinese Institute of Aviation Medicine in Beijing trained 18 jet fighter pilots in qigong, the pilots were better able to perform under stressful flying conditions.

A Taste of Tai Chi

Most teachers of tai chi say that learning one of the 50-move “short forms” popular in the United States takes about a year-and truly mastering the discipline takes a lifetime. The best way to train in tai chi is to enroll in a class. To find one, look in the Yellow Pages under “Tai Chi” or “Martial Arts” or ask for referrals from yoga or martial arts instructors.

To get just an idea of what tai chi is like, try these first five moves from the form that Terry Dunn demonstrates in his video Tai Chi/or Health.

To test the effects of tai chi on people with high blood pressure, cardiologists at Royal Hallamshire Hospital in Sheffield, England, assigned 126 heart attack survivors (average age 56) to one of three groups. The first practiced tai chi once or twice a week; the second engaged in aerobic exercise once or twice a week; and the third participated in a support group that met once a week. After 8 weeks, the tai chi group registered the greatest drops in blood pressure, surpassing even the aerobic exercise group. The support group’s blood pressure readings remained unchanged.

Preparation: Stand with your heels together and your toes pointing outward at about a 20-degree angle. Place your arms at your sides. Focus on your breathing. Bend both knees and slowly shift all of your weight onto your right leg.

When there’s no weight on your left leg, move the leg to the left so that your feet are shoulder-width apart. In a low seated position, slowly shift all of your weight to your left leg, keeping your back straight.

When there’s no weight on your right leg, turn your right foot, pivoting on your heel until your feet are parallel. Shift your weight so that it’s equally distributed between both legs. With your feet firmly planted on the ground, slowly rise up, straightening your legs. Rotate your elbows outward. Then flex your wrists upward until they are at a 45-degree angle with the plane of your shoulders.

Beginning: In this sequence, your torso is still and erect. Only your arms and shoulders move. Stand in the ending Preparation position. Inhale. Imagine that strings are tied around your wrists, pulling them upward in front of you. Allow your fingers and hands to dangle in a relaxed state as you slowly bring your wrists up to shoulder level. When your wrists are at shoulder level, exhale and lift your fingers. Straighten your hands so that your palms are facing slightly forward. With your legs firmly planted on the ground and knees slightly bent, project your energy from the tips of your fingers.

Inhale. Drop your elbows to a position over your hips and draw your hands back to your shoulders. Gently lift your palms, then your fingers. While maintaining your wrists and hands in this position, allow your arms to slide down the length of your body until they are at your sides. Return to the ending Preparation position.

Ward Off Left: Begin in the ending Preparation position. Shift your weight to your left leg and pivot 90 degrees on your right heel. As you turn, raise your right hand to shoulder level with your palm down, and move your left hand to a position over your right hip with your palm up. Imagine that your hands are holding a large ball. Square your shoulders and hips to the right, keeping your knees bent and your weight in your seat and legs.

As you set your toes down, shift all of your weight to your left leg and turn your torso left from your waist. As you turn, raise your left forearm across your chest and drop your right arm so that your right hand is over your right hip, palm facing down. Pivot your right foot 45 degrees.

Slowly shift your weight and turn left. At the same time, allow your left hand to swing down with the force of gravity and then back up so that it’s in line with your left shoulder. Your right arm should remain bent, with your fingers up, as your forearm is brought across your chest. Your elbows should have a slight bend, as though you were holding a ball at chest level.

Because qigong is only now becoming popular in the United States, teachers may be hard to find. Ask tai chi, yoga, or martial arts instructors in your area for recommendations. To get a sense of how qigong differs from tai chi, try these three exercises offered by qigong master Ching Tse Lee, Ph.D., psychology professor at Brooklyn College.

The Rejuvenator: Stand with your feet parallel and shoulder-width apart. Keeping your upper body straight and relaxed and your arms at your sides, slowly bend your knees about 45 degrees into a quarter-squat position. Slowly raise your arms in front of you about 35 degrees, with your elbows slightly bent and your palms facing each other. Bring your palms closer until you feel qi (characterized by sensations of tingling, throbbing, trembling, cold, heat, or electricity). Once you feel qi, stay with it and become familiar with it. The sensations may come and go. Practice this exercise for 3 to 10 minutes, or as long as you can comfortably maintain the bent-knee position. This exercise should leave you feeling refreshed and rejuvenated.

The Calmer: Begin by doing the Rejuvenator. After you’ve experienced qi for 5 to 10 minutes, observe your breathing-the natural expansion of your body as you inhale and the contraction as you exhale. Merge into the moment meditatively. Next, observe how your palms move farther apart when you inhale and closer together when you exhale. Once you’ve appreciated your breathing and body expansion and contrac­tion, feel the energy all around you. Does one part of your body feel lighter or heavier? Warmer or colder? If you practice daily, you’ll eventually feel the energy around you as even and balanced. This exercise produces a sense of profound calm.

The Energizer: This exercise enhances the circulation of qi around your body. Begin by doing the Rejuvenator. Then relax and observe your breathing for a few minutes, feeling the expansion and contraction of your body, as in the Calmer. While inhaling, let your arms float up to shoulder height, with your elbows slightly bent. While exhaling, let your arms stretch out effortlessly. Inhale and let your arms bend and slowly descend until your thumbs touch the sides of your legs. Exhale and let your arms straighten out along your sides. Repeat this exercise for 3 to 5 minutes. As you do, focus on the qi flowing around you. You may feel it circulate from your back to your hands as you complete each cycle. Empty your mind meditatively. Become one with the exercise. Even if you don’t notice qi movement at first, you will eventually-sometimes when you least expect it.